Ekiti offers serenity and a wide variety of tourist attractions such as extended rivers, unique wildlife, vast tracks of unspoiled nature ranging from tropical forest, magnificent waterfalls, conducive hilltop holidaying climates, spectacular warm and cold water springs oozing out and touching, yet retaining its thermal identity, nowhere in the world has this unique warm springs experience. Other attractions include traditional ways of life preserved in local customs; rich and varied handicrafts and other colourful products depicting or illustrative of native arts, lifestyle, dance and the authentic and unsophisticated but friendly attitude of both the indigenes and residents of the State. Ekiti State is blessed with many tourist sites, many of which are yet to be explored and developed. The present government believes that if the tourist sites are developed, they are capable of generating billions of Naira for the state annually. The government has therefore decided to partner with the private sector to fully develop the tourism potentials of the state so as to generate substantial revenue for government, create employment opportunities and alleviate poverty at the grassroots. 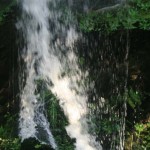 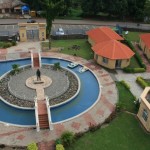 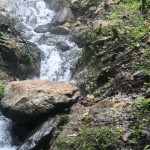 Egbe Dam
This Dam is constructed on Ose River at Egbe Ekiti in Ekiti East Local Government. The dam supplies the whole Local Government regular pipe-borne water.
Both fishing and irrigation systems of farming are practise by the villagers. People go to Egbe Ekiti from all over the state to purchase fresh and smoked fish for their local consumption.
Both dams and lakes are good resort centres for tourists coming to Ekiti on a visit.

The Erinta Water falls at Ipole-Iloro is located at about 6km North-West of Ikogosi. It could be reached only through a secondary road from Ikogosi. The road leading to the fall passes through the Ikogosi Tourist Centre. Visit this resort centre and be marvelled at the work of nature. Tourists fell the chilly effect of this fall about 10 metres away. It has three pronounced escarpments. A research recently carried out by an Afro American indicated that the water falls could generate electricity (Hydro-electric power).
This resort centre is naturally endowed with thick and evergreen forest.

Ero dam and lake are man-made tourist attractions in the State. This dam is located at Ikun Ekiti in Moba Local Government of the State. The lake covers some kilometers. In fact, it was initially designed to cover only five kilometres but eventually it covered eleven kilometres. This dam supplies three Local Governments drinkable water and the Local Governments that benefit from this are: Oye, Ido-Osi and Moba itself. This is to say that the dam supplies over one hundred towns and villages in the state with pipe borne water.
According to experts, the dam is capable of supplying Ekiti State as a whole potable water. The indigenes of the town and neighbours and even Hausas fish on this Ero lake. Local canoes, boats and modern flying boats are made use of by these fishermen. This dam encourages the people to practise irrigation (system of farming) in their environments.

The meeting point of warm and cold spring
The Haven of tourists in Nigeria. Ekiti State is richly endowed with tourism potentials. Tourists to the state would be irresistibly charmed with the beauties of Ikogosi where warm and cold water oozing from different sources flowing separately to join in a pool but each retaining its thermal identity.

Ikogosi Ekiti, where the warm spring is located is in Ekiti West Local government of Ekiti State of Nigeria. It is situated in a valley and from the surrounding hills rises the warm spring.

Giant Tortoise being taken care of by the Hard working Zoological assistance Traditionally speaking, there are many stories from the indigenes of this town regarding the origin of the warm spring. A version of the stories rests more on the traditional belief of the people that both springs (Warm and Cold) were wives of the same husband who turned to springs water in the wake of rift and rivalry between them. The hot and ill-tempered first wife believed to have turned to the popular warm spring while the cool-tempered second wife turned to cold spring water. The husband became the undulating hills that encompass the springs. It is well established that some of the Villagers still worship the springs as their deities.
The scientific proof could not be wished away in favour of the traditional belief. The possible and plausible scientific explanation is that the deeper a body of water goes underground, the hotter it becomes and if by chance it is forced back to the surface through some earth fault, the temperature will be relatively high.
The Baptist mission in the early 50s established a youth and conference centre and other conviniences on a hill adjacent to the warm spring area. This started attracting different people from far and near, even foreigner started visiting the centre to the the work of nature. At the wake of 1978 however, the Ondo State acquired this popular tourist centre from Baptist Mission. A few infrastructure were put in place by this Mission before the resort centre was acquired from them by the State government, but, after the acquisition of this centre, however, both the federal and the state government focused attention on how to develop the centre to a modern tourist resort.

The spring water is said to have some therapeutic effects in some diseases like rheumatism and guinea-worm. People who have access to the spring use it for the battery of their vehicles instead of the normal battery water.

These two hills are located at Northern and southern parts of the town (Ikere Ekiti) respectively. They are both steep-sided hills. These are good resort centres for Tourists to visit and see for themselves what God has done for the State of Honour, Fountain of Knowledge. There are deities in charge of these two hills. Both are worshipped accordingly. In line with the belief of the people of this town the Olosunta and Orole deities reside in the hills respectively. Both deities are credited with some feats such as provision of children to barren women and protection of Ikere from warfare. They are believe to be responsible for the welfare of the town. Ikere Ekiti is usually described as the only unconquered town in Ekiti during the popular inter-tribal wars.
Below is a list of festivals in Ekiti State:

Order Your Cakes and Small Chops

EkitiReporters is a progressive-minded news platform established in 2019 to bring to the limelight, news within Ekiti State and beyond.

At EkitiReporters, we promote the Unity and Progress of the Yoruba people, the Nigeria Nation, the Black Race and the World at Large. Therefore, we publish stories that uplift the People, Culture and advance the general well–being of our People, Nation and Race.

We use cookies to ensure that we give you the best experience on our website. If you continue to use this site we will assume that you are happy with it.Ok